Home » Off Topic » How to Connect Xbox Controller to iPad or iPhone with iOS 13 and up.

How to Connect Xbox Controller to iPad or iPhone with iOS 13 and up.

How to Connect Xbox Controller to iPad or iPhone with iOS 13 and up. Start from iOS 13+ version, the iOS devices such as iPhone or iPad now have support for Xbox Wireless Controller. Support both Xbox Series Controller and Xbox One Controller. The setup is easy, just using bluetooth. Here's the step. 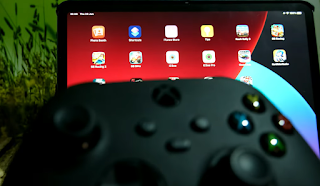 1. Turn on Bluetooth on iPhone/iPad

2. Press small button above xbox home button at the same time, until it blinking fast.

3. Search on Bluetooth, it will show "Xbox Wireless Controller"

5. it will Connected, and it stop blinking.

Here's the quick video about that.

For the app that support natively it will just plug and play, but if the apps need more configure, just change the option to gamepad and configure  manually. For touch screen only games this will never support by default.