"The Media Transfer Protocol (MTP) is an extension to the Picture Transfer Protocol (PTP) communications protocol that allows media files to be transferred atomically to and from portable devices.[1] Whereas PTP was designed for downloading photographs from digital cameras, Media Transfer Protocol allows the transfer of music files on digital audio players and media files on portable media players, as well as personal information on personal digital assistants. MTP is a key part of WMDRM10-PD,[1] a digital rights management (DRM) service for the Windows Media platform."
https://en.wikipedia.org/wiki/Media_Transfer_Protocol

By default MTP is not installed on archlinux. So if you install some file manager, like PCManfm for example, when you connected the windows phone or android phone it will not detected.

To install mtp support on archlinux: 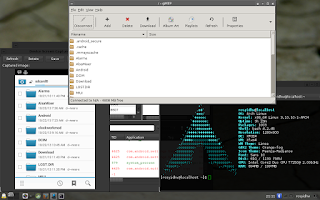